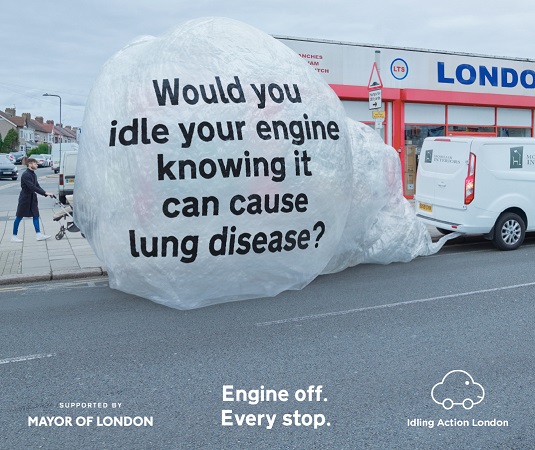 TRL is calling for local authorities to replicate a new evidence-based Idling Action London initiative at the Westminster Commission for Road Air Quality Working Group meeting on 1st March in a bid to persuade changes of driver behaviour nationwide. Following a new public advertising campaign launched last week encouraging all London drivers to turn off their engines when stationary, TRL are emphasising that air pollution is not only a problem in the capital. Consequently, there is a need to replicate Engine Off campaigns across the rest of the UK to combat the impacts of air pollution on public health more widely.

Each year, outdoor air pollution is estimated to cause 40,000 premature deaths in the UK – 9,000 of which are in London . With more than 75% of deaths accounted for outside of the capital and large cities such as Birmingham, Manchester and Edinburgh suffering from major sitting traffic issues, this is not just a London problem but a UK wide challenge.

The Idling Action London campaign uses data from a recent TRL study which highlighted the major problem faced in highly urbanised areas. Though many individual initiatives exist on a local scale, TRL is advocating the use of its evidence-based approach by local authorities to nurture these initiatives and create new ones, using local real-world data as the basis for a consistent nationwide approach to changing driver behaviour.

Richard Cuerden, Director of the TRL Academy, explains: “The TRL Idling Action Research represents the first time we’ve seen real world data and the first time such data has been deployed as part of a public awareness campaign. The findings are startling and significantly worse than previous estimates. We must act now to combat the spectre of air pollution from engine idling.”

According to the Department for Transport, the number of licensed cars across all 32 London Boroughs in 2020 totalled over 2.65 million and for LGV’s over 210,000. Based on the TRL findings, in one day if 50% of all cars in London idled at a set of traffic lights for just one minute, nearly 30,000 kg of CO2 would be released. For LGVs, the comparative figure stands at almost 3,000 kg.


To give this greater context, a UK native broadleaf tree is estimated to take up 1,000 kg of CO2 during its full lifetime (approximately 100 years). It would take 66 trees 100 years to absorb the CO2 released if each vehicle in London idled for just one minute.

Whilst idling, vehicles are also producing harmful NOx emissions. Although the values are small for individual vehicles on individual journeys, cumulatively this is significantly increasing exposure to a pollutant proven to cause respiratory disease. For example, a large diesel family sized car may emit up to 0.07g of NOx per minute whilst idling. Based on five minutes of idling outside school gates each morning and afternoon, this translates to 0.7g of NOx per day, or 133g per academic year. These figures suggest that, particularly in built up areas, the air pollution level may well exceed the limit set by the UK Government.

Cuerden concludes: “There is growing evidence from bodies including Public Heath England and the World Health Organisation that engine emissions and air pollution pose a grave threat to respiratory health. We must act now across the country to reverse the damage and improve the outlook for public health in the future.”

TRL's full report can be found using the link below.