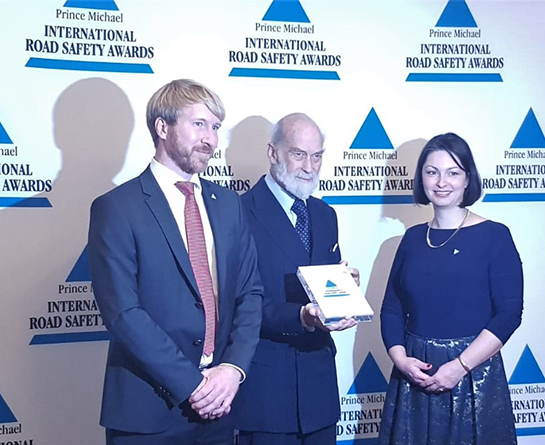 It's always good to receive recognition for the work you do and over the years, TRL has been fortunate enough to win a number of awards. Highlighted below are just a few of the more recent accolades we have been awarded.

Investors in People is piloting a blueprint for organisations in the UK to use to ensure they are consistently delivering high quality apprenticeships. TRL have been awarded Silver accreditation for its commitment to training.

TRL have 14 members of staff on the apprentice training programme, 7 women and 7 men, of all ages and at all stages in their careers.

TRL have been re-accredited and awarded the Investors in People (IIP) Standard at Silver level until 2021, recognising TRL’s commitment to continuous improvement in creating a better workplace.

We are delighted to be ranked among the top 250 elite privately owned businesses in the Thames Valley, making an important contribution to both our local and UK economy.

The Bus Safety Standards team were rewarded with a Commended certificate at the CIHT Awards in June 2019.

In 2019 TRL and the European Commission were jointly awarded a Prince Michael International Road Safety Award for our work producing the scientific evidence base upon which the new EU General Safety Regulations was established.

CIHT / VINCI Concessions Asset Management Award for TRL's traffic-speed structural survey of the strategic road network. The development programme, sponsored by Highways England, saw the development of a network survey called the Traffic Speed Structural Survey (TRASS) which utilises a new device – the Traffic-speed Deflectometer (TSD). The surveys collect asset information on the structural condition of the road network, providing an estimate on the remaining life of the pavement to help support maintenance decisions and removing the need for costly, disruptive structural investigations.

Judges’ Special Merit Award at the 2015 Highways Magazine Excellence Awards. The prestigious award, which recognises the project or initiative that has had the greatest impact on society, safety and the highways industry, was presented to TRL for its Off Side Signs Removal (OSSR) project, delivered in collaboration with Highways England and the Road Workers’ Safety Forum (RoWSaF).

Dr David Hynd, Head of Biomechanics and Injury Prevention at TRL, has been awarded the U.S. Government Award for Safety Engineering Excellence. The award, which recognises outstanding contribution to vehicle and road safety, was presented to Dr Hynd at the Technical Conference on the Enhanced Safety of Vehicles (ESV) for his significant contributions to biomechanics research and improving vehicle safety.

Green Mind Award for the most innovative project in the Middle East and North Africa (MENA): use of alternative aggregate in construction in Qatar.

Prestigious Crampton Prize for one of the best papers published in its journal awarded by the Institution of Civil Engineers to TRL’s Dr Mike Winter, Head of Ground Engineering, Regional Director (Scotland) and Honorary Chief Scientist and his co-authors, Matt Harrison, British Geological Survey, Forbes Macgregor, Consultant to Transport Scotland, and Lawrence Shackman, Transport Scotland. The paper, entitled Landslide Hazard and Risk Assessment on the Scottish Road Network, reported on the approach taken to a regional study of hazards and risks from debris flow as they affect the Scottish road network.

Qatar Contractor Forum's most innovative project of the year awarded to TRL for the use of alternative aggregate in construction in Qatar project.

ITS-UK Excellence Awards - TRL's Denis Naberezhynykh is voted Young Professional of the Year for the work he has undertaken and his developing expertise in electric vehicle technology, and Dr Alan Stevens receives the Neville Rees and Peter Hills Award for outstanding contribution. Nominated by all the previous winners, Alan has worked on the application of new technology in transport for over 25 years. He has also helped shape ITS (UK) since its inception.