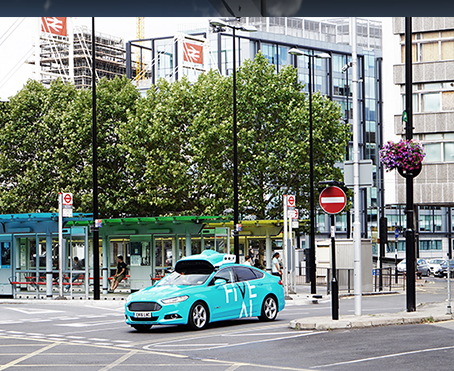 TRL was a key member organisation of the StreetWise consortium, funded in part by Innovate UK, the UK’s innovation agency.

Automated vehicles are central to the UK government’s industrial strategy because of the potential they represent for addressing several challenges facing urban areas, including congestion, vehicle emissions, commuting time and costs and road traffic casualties.

Before automated vehicles can be safely and successfully integrated into urban road networks, in-depth track and real-world testing on public highways must be carried out.

To meet the necessary legal requirements to conduct testing on public highways and secure insurance for the trial, a robust safety case must be developed.

TRL’s role in the project was to develop the Safety Case for on-road trials of automated vehicle technologies, based on TRL’s extensive experience with developing safety cases for automated vehicle trials. The Safety Case is required to help manage and reduce potential risks involved in trialling these technologies on the public road. A carefully managed approach to testing in real-world environments is an essential part of developing automated driving systems for deployment in road vehicles.  The abridged version of the safety case can be found here.

TRL also took responsibility for analysing UK collision data in preparation for defining priorities for simulation-based testing. TRL then curated a database of test scenarios. Out of this activity, TRL develoed a proof of concept for a scenario database that could facilitate the testing and certification of automated vehicles for use on UK roads.

To facilitate the development of the test scenario database, the project had to create a Scenario Description Language (SDL), which incorporates definitions of both static (i.e. road geometry) and dynamic (vehicles, cyclists, pedestrians etc.) actors. The database could potentially be used to test and validate the performance of automated vehicles, in particular ensuring that they respond accurately and appropriately to a typical range of scenarios encountered on UK roads.

The STREETWISE project originally aimed to develop and demonstrate an automated system, which would be globally-competitive, safe, secure and validated to the standard required for a major insurer to underwrite it. The project hoped this would lead to commercial service implementation, providing cities like London with a clean, safe, convenient and affordable commuting alternative.

Many facets of the project proved to be far more demanding than anticipated. Trials using members of the public did take place in London, providing ample proof of concept of the automated system. Great headway was made in understaning how to validate the system. But the ambition to develop a blueprint for a commercial service was set aside in favour of achieving the technical goals.

At the end of the project, there was no final report published, instead a series of presentations were given covering what had been achieved, and examining its relevance. The team at TRL had focussed on the question of How to validate the safey of new ADAS technologies. The approach TRL took was to develop a technique called "virtual validation".

Virtual Validation is a method to collect objective evidence of the impact of the decision making that is built into the “brain” of an AV system. It uses a powerful combination of 3-D simulation of an AV, injected into a simulated environment, to see how the vehicle behaves when presented with precise conditions known to have caused an incident in the real world. With that data, it then becomes possible to benchmark the AV against the expected behaviour of a human driver, and determine whether an AV’s choices and reactions would result in a better outcome.