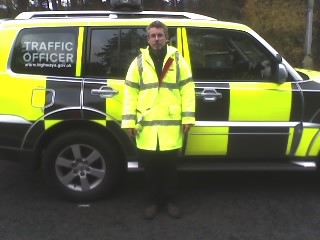 Can you see me?

In a paper in the journal Ergonomics in 1990, Kåre Rumar suggested that the ‘basic driver error’ is late detection of another road user.

Late detection is also what we might call a fundamental error. Detection of objects is a foundation on which movement is built; without detection, no further judgement or decision-making of any kind is possible.

In this ‘back to basics’ article, I’d like to consider the important role played in road safety by ‘detection’ and the related concept of ‘conspicuity’.

Spoiler: It isn’t just about yellow jackets (but they can help).

To ‘detect’ something is to know that it is present. The Penguin dictionary of psychology discusses the ‘absolute threshold for detection’ which is “The…point along a stimulus continuum at which the energy level is just sufficient for one to detect the presence of the stimulus.”

Of course, it is more complicated than this on roads, not least because in laboratory studies of detection thresholds people are typically looking directly at the stimulus and reporting when it becomes visible. In a road environment however, drivers are not looking at everything all the time. Rather, they are scanning the road environment looking for different stimuli (other vehicles, gaps in traffic, signs, landmarks) depending on their goal.

Another definition is therefore useful – that of ‘conspicuity’. This is the extent to which an object stands out from its surroundings (Lesley, 1995) and it breaks down into at least three types (see summary and follow-up references in Helman, Palmer, Haines & Reeves, 2014). These are:

In an ideal world, all road users would be highly conspicuous (and therefore highly detectable). Drivers would search for them rigorously, all the time, and would be primed to expect all types of road user – even the ones (like motorcyclists and cyclists) who are less common than cars.

Unfortunately, drivers fail to detect even highly visible road users all the time. A web search of helmet camera footage from motorcyclists and cyclists will provide some extraordinary examples.

The non-detection of motorcyclists is so common that there is even an acronym to describe it. ‘SMIDSY’ collisions are described by motorcyclists as those in which a driver, having typically just driven across the path of an oncoming motorcyclist, utters the words ‘Sorry Mate, I Didn’t See You’ in the aftermath.

There are many reasons why road users go unnoticed. In TRL's work in New Zealand looking at this, again from the perspective of motorcyclists, we spoke about three ways in which so-called SMIDSY collisions can happen as a result of failed detection. First, drivers can simply fail to look in the direction needed to detect an oncoming motorcycle. Second, drivers can look in broadly the right direction, but so briefly and without care that even a motorcycle that is visible is missed. Third, drivers can look in the right place – really, really carefully – and still fail to detect a motorcycle that for whatever reason is simply too difficult to see against its background.

The same conceptual framework can apply to all instances of failed detection of course – not just motorcyclists. The question is – how can we make it more likely that road users do detect each other?

How can we make road users more detectable?

We do understand some ways to make objects more conspicuous. Essentially, it is about making objects contrast with their background in such a way that they are not ‘lost’ in the clutter. There is even a standard way of measuring this for some things in road environments based on the technique of lateral masking. Note one important thing – conspicuity is not a feature of the object, but a feature of the relationship between the object and its background.

The implication of this is that even if some piece of high visibility clothing such as the ubiquitous ‘bright yellow jacket’ is going to provide high conspicuity in some settings, it is not in others (as the picture below demonstrates – look away from the picture so it is in your periphery, and consider how clearly you can see the person against the background of the vehicle).

This is not to say that yellow jackets are not useful. They almost certainly are, and there is even good evidence that they can reduce collisions for groups like cyclists. They are not useful all the time though, and of course some cyclists and pedestrians will not want to wear such clothing. (If this seems like something they SHOULD do even if they don’t want to, consider whether it would be reasonable to insist that all cars had to be painted bright, reflective yellow.)

There is likely also some education that can be done to raise awareness in road users about how (in)conspicuous they can be. For example, research has shown that pedestrians massively overestimate how visible they are to car drivers at night, and that brief educational interventions may be able to help in addressing this information deficit. The information deficit is also present in those who spend a great deal of time in road environments and who do, typically, need to wear high visibility clothing. For example, in TRL’s various research projects with road workers, those wearing good quality PPE like that in the picture above will tend to say that they are visible to drivers hundreds of metres away at night. What is worrying however is that when a measure of attention conspicuity is used to estimate detection distance (remember, drivers are rarely deliberately searching for road workers) detection is often measured in tens of metres, which at motorways speeds is less than adequate (see this 2010 study - one of the last to use TRL's famous track in Crowthorne).

Of course, the burden of conspicuity should not be only on those objects that need to be detected. Just as conspicuity is a feature of the relationship between an object and its background, so detection is a feature of the relationship between the object and its observer. Another way of making road users more detectable is to persuade those doing the looking to do so with more care and attention. We do not yet know how to do this. Some research has shown that having experience with different modes can help (for example being better at detecting motorcycles if you yourself have experience of riding one). The literature is not in complete agreement however – for example this study found no corresponding detection advantage for cyclists. Other research has examined whether feedback from collision detection technology might be able to help, although the results are equivocal, and more research is needed to unpick some potentially complex findings.

If we can find a way of reminding drivers to look carefully, and having that reminder ‘stick’, then the benefits could be great. In many studies, by TRL and others, it has been shown that when drivers are asked to look for things (‘search’ conspicuity) detection is far better than when instructions are less specific (‘attention’ conspicuity’).


Detection is necessary, but not sufficient, for safety

Even when we have solved the ‘detection error’, we still have work to do. There is a fourth way in which ‘SMIDSY-like’ collisions can happen; drivers can look and detect a motorcycle approaching them, or perhaps a cyclists or motorcycle or even horse they are approaching from behind at speed, but fail to accurately judge the speed, and therefore time to contact. I have written before on the importance of being able to judge speed of approach accurately, especially with smaller road users such as motorcycles and horses in lower light conditions. This is so that driver behaviour (especially speed) can be adjusted to fit the situation; if approach speed is mis-judged then collisions can occur, even if detection was achieved.

From this perspective, detection should be seen for what it is. Utterly fundamental, but still only the first step in a series of events that lead to safe road use. Of course, ‘SMISYBDJYASWSATSGDM’ (Sorry Mate I Saw You But Didn’t Judge Your Approach Speed With Sufficient Accuracy To Support Good Decision Making) isn’t as catchy.

Can you see me? Good – that’s a start. Now keep paying attention and try your best to work out what happens next.