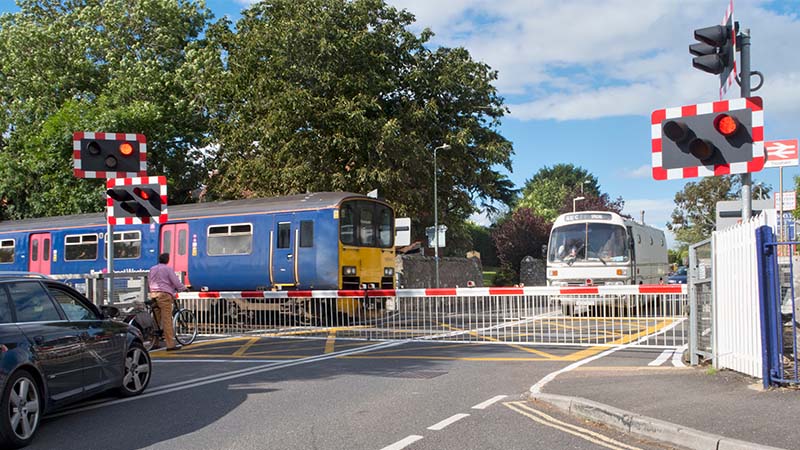 Collisions at level crossings are on the increase. Robert Lee, Safety Researcher at TRL, believes crossing users are not interpreting the warning signals as intended. So is it possible to create a safer crossing design?

Level crossings enable railway lines and roads to intersect. They are generally deployed where bridges are either infeasible, or there is insufficient economic justification. Level crossings may be characterised as either: active, where signals warn users of approaching trains; or passive, where a user must rely on their wits, judgement and communication with signalling staff to facilitate safe passage. This article focuses on drivers at active crossings, which despite their provision of warning signals remain a significant cause of road casualties on UK railways (Evans, 2011). Between 2010 and 2020, there were 16,344 recorded near misses between trains and road vehicles, and 87 collisions leading to 19 fatalities, where the cause of the collision was unrelated to suicide (Office of Rail and Road, 2020).

Research by TRL has revealed the majority of pedestrian crossing users are not interpreting the warnings from active crossing’s as intended by their design, (Cooper, Mazzeo, Chowdhury, Bell & Kinnear, 2021) resulting in them increasing their risk of being struck by a train. There is a deficit of similar research into the decision-making processes of drivers at level crossings, where decisions made put them at greater risk. This poses the question, if there was a greater understanding of why drivers choose to ignore warning signals, would it be possible to create a safer crossing design?

The main types of active crossing currently in use on UK railways are the Automatic Half Barrier Crossing (AHBC) and the Manually Controlled Barrier (MCB) of which there are various sub types. Collisions at these types of crossings may occur through signalling and staff errors (RAIB, 2011) (RAIB, 2018), though collisions and near misses through deliberate user error are encountered more frequently (RAIB, 2012; 2014). Attempts to reduce collisions through user misuse have so far focused on retiring the more dangerous AHBC types and replacing with safer MCB variants. However, collision risk at MCBs is still too high and their continued adoption will not be sufficient for Network Rail to meet their long term goal of zero accidents at level crossings (Network Rail, 2019).

The first major study into driver behaviour at UK level crossings was conducted by Professor Stott (Stott, 1987). This study centred on the high accident rate at the now largely replaced Automatic Open Crossing (AOC) which comprises road traffic lights only. AOCs entered service in 1963, quickly gathering a reputation as a dangerous type of crossing. Stott’s investigation concluded that the cause of the accidents was drivers deliberately ignoring the warning lights, traversing the crossing whilst trains approached. Stott found a non-linear relationship between accident risk and the volume of vehicles using the crossing, depicted in Figure 1.

Initially, as traffic volume increases the risk of a collision also increases. This is to be expected, as a greater traffic volume will create a greater probability of a road and rail vehicle being on course to collide. However, with further increases in traffic, this relationship attenuates and ultimately reverses. Stott hypothesised this relationship occurred as drivers who would otherwise disobey the warning lights would not do so if they believed their actions would be witnessed. However, Stott made no conclusions as to the motivations and decision processes that led to this behaviour. This relationship has been integrated into Network Rails All Level Crossing Risk Model (ALCRM) used to estimating risk at UK level crossings (Health & Safety Laboratory, 2008).

Further qualitative studies have been conducted to investigate driver behaviour finding actions such as those listed below contributing to collision risk at protected level crossings (Davis Associates Limited, 2005), in addition to human factors influencing these decisions;

Few mathematical or computational models have been authored which reproduce this behaviour (Ghazel, 2009; BSI, 2019; Lee, 2020). Similarly, there is little undestanding of the complex interactions and influences that underpin motivation and decision making at level crossings, as highlighted by TRL’s work with pedestrians. No models have been created to explain or simulate the decision-making processes which motivates the occurrence of these behaviours.

TRL believes that there is the potential to design level crossings with greater consideration of human risk-taking behaviour. For example, recent qualitative research by TRL created a Bayesian Belief Network for pedestrian decision making at AHBC crossings, finding the wig-wag road traffic lights were frequently interpreted as a ‘hustle alarm’ encouraging pedestrian users to cross quickly before the barriers descended. The work identified a complex web of motivational influences among pedestrian users. This insight has the potential to frame discussion on next generation level crossing research and design.

Similar research could be conducted into driver’s decision-making process, to quantify the motivations which cause non-compliance with crossing protection systems, but also the motivations for the reductions in risk which are observed with increasing traffic volumes. Potential reasons for this include:

If quantified and related to the specific behaviours listed earlier, these motivations might be targeted in level crossing design changes to create a more favourable risk profile in existing crossings, or even to design a novel type of crossing. With our state of the art driving simulator, TRL is perfectly positioned to undertake this research. Inspired by our earlier work, we might explore what proportion of drivers understand the unusual Wig-Wag style traffic lights which signal drivers to stop at Level Crossings. Using our driving simulator, we could virtually replace a crossing’s Wig Wag traffic lights with the conventional Red-Amber-Green lights deployed at junctions, and measure how driver’s responses change.