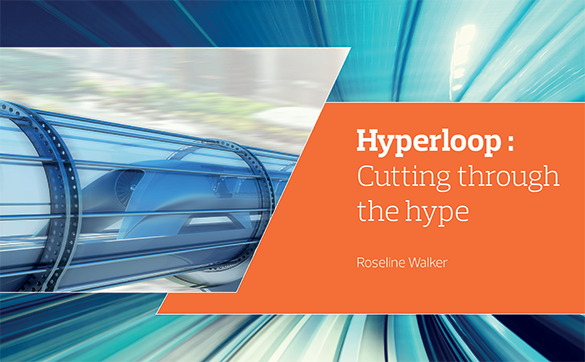 Hyperloop: based in fiction or reality?

Gavin Bailey and Roseline Walker take a look at the Hyperloop concept and ask: Is this new technology a revolutionary development in mass transit, or just another beneficiary of the Elon Musk effect?

Since the proposition of the Hyperloop concept by Elon Musk in 2013, the technology has been ambitiously adopted by a number of companies such as Virgin Hyperloop One and Hyperloop Transport Technologies, who are now advancing its development at a rapid pace. Largely pitched as the fifth mode of transport, is this new technology a revolutionary development in mass transit, or just another beneficiary of the Elon Musk effect?

Hyperloop is a proposed new mode of transportation that moves freight and people quickly, safely, on-demand and direct from origin to destination. The Hyperloop will see individual low capacity magnetically levitated pods propelled at high speeds through an extreme low pressure, low friction environment contained within a tube system. Initial predictions propose that Hyperloop could reach top speeds of 760mph with an average speed of 600mph. However, recent proposals are suggesting speeds of 240mph based on the top speeds achieved to date in system testing.

The value proposition of the technology is to provide high speed terrestrial-based travel for small ticket prices and low energy demands that can rival trans-national flights and rail. In the UK context, the current projections indicate a journey time of 14 minutes between London and Birmingham, and 50 minutes between London and Edinburgh. When compared with the existing fastest modes of transport available for each route this would result in a reduction in journey time of 83% and 77% respectively[1]. If Hyperloop hubs can be located centrally within urban areas, integrated into the existing transport networks and interchange systems, the technology could deliver a seismic shift away from competing transport modes. However, the practicalities of the technology are yet to be stress-tested against those of rail and trans-national flights.

Due to the nature of the concept, Hyperloop requires an airlock system to maintain the low-pressure tube environment which restricts the system to a single origin and destination for each tube, as well as the capacity of each pod. In terms of capacity, if we assess this in relation to the hourly capacity of the UK rail route between London to Edinburgh, the below analysis indicates that a competing Hyperloop line would need to operate 30 pods per hour to match the transit capabilities of rail. This would require a Hyperloop pod to depart every two minutes, which is comfortably within the safety parameters required. However, the practicalities of dealing with this many pods per hour could be a challenge. [2]

Based on these figures, Hyperloop appears to be a viable alternative to rail. That said, the current design of the systems does not permit intermediate stops along a route, suggesting multiple tubes would be required to service the major towns and cities along a single high-speed route, posing a significant problem in relation to land take.

Assuming energy demands for the system are met with clean renewable energy, Hyperloop promises to be a low carbon mode of transport with a predicted energy cost per passenger for the ‘flagship’ route between Los Angeles to San Francisco of less than 100MJ, which is a reduction of 87% compared with rail and 90% compared with air.[1

Where could they be built?

Most Hyperloop systems are proposed to be built above ground on pylons which may help reduce the costs related to land acquisitions and also improve the resilience of Hyperloop from weather conditions, earthquakes and crashes. However, in the UK there are issues related to hilly topography and numerous protected landscapes. This would likely push the construction of Hyperloop underground, which would be very costly and also quite challenging in parts of the UK due to local geological factors. Due to these challenges, the UK will take a more cautious approach in the uptake of Hyperloop than some other countries, with the Department for Transport indicating a timescale for adoption of at least a couple of decades.

The timeframe for Hyperloop

Whilst still only in conceptual testing, Hyperloop companies are aiming to have a fully operational system ready within the next three years (2021). If launched, this could be a significant market disruptor for current modes of transport. The rail industry could be under greatest threat as it has been hampered by limited investment along local and medium- lower passenger volume lines leaving it slow, inflexible and infrequent. Whilst there are planned developments in the medium-term for rail, it is unlikely that these will result in transformational changes.  Hyperloop could therefore genuinely compete against rail as the primary mode to link major cities with rail connecting Hyperloop hubs to smaller urban areas. Whilst Hyperloop could compete directly with transnational flights, it could also act as an enabler to connect airports in the same way that trains currently connect airport terminals. With journey times between London airports estimated to be between five-seven minutes, Hyperloop could create a giant transport hub and offer a solution to the much debated third runway at Heathrow.

In addition to this, the component technologies used in Hyperloop may have a wider reaching impact on the transportation industry, in a similar fashion to the trends witnessed from the development of connected and autonomous vehicles. The low energy design of Hyperloop could be a game changer in helping to reduce the overall carbon impact of transport on a global scale; and the high speeds achieved through Hyperloop could drive economic growth through fully integrating labour and commercial markets to enable countries to become more competitive and productive. Indeed, a Hyperloop in the UK would enable each of the key strategic cities to be connected to each other and to London with a journey time of under one hour, which would allow commuters the flexibility to live and work anywhere on the transport corridor.

Whilst Hyperloop offers a variety of key benefits in relation to speed and energy, there are significant barriers that will need to be cleared long before it could become a reality, not least the fact that the technology remains unproven. Therefore, the next steps should be to establish a supply chain for Hyperloop, that includes the key skills and knowledge that this country has to offer in the initial research and development phase, in a first step toward a comprehensive understanding of what the system will look like.

From a TRL perspective, there are a variety of areas that require an assessment and review in order to build the safety case for this new mode of transport, including a full and detailed appraisal of the system, highlighting the risks and likely implications to passengers during operation. We will need to analyse every area, including propulsion/levitation systems technologies, virtual reality systems, tunnelling methods, power systems, switching methods, pod and station designs and cyber security initiatives to name a few. Once all of this is completed, and the case for Hyperloop agreed, the next step will be to develop a full-scale trial.

For a Hyperloop system to be publicly acceptable, its safety must be demonstrated to stakeholders, insurers, regulators and the public. The nature of the Hyperloop system presents unique safety challenges and the severity of any incident has the potential to be extremely high. The only way for these to be overcome is through real-world trials on test tracks which are currently under development. The safety case will form a key part of the managing risk process, but it is not sufficient on its own. Organisations operating Hyperloop systems will need to work within an externally verified framework to provide the necessary degree of assurance required. The safety governance approach to Hyperloop should be similar to that of other technically complex, high hazard industries such as rail, aviation and nuclear power.

To place all of this in to context, TRL has been involved in a number of projects which require safety assurances for innovative transport technologies, for example in collaboration with Continuum Industries on the human factors and safety requirements for the Hyperloop concept, as well as GATEway for their Connected & Autonomous Vehicles (CAV) in urban environments project. TRL is at the heart of the innovative surface vehicle technologies of the future.

In TRL’s opinion, the case for Hyperloop is strongest when freight transport applications are considered. Going at the speeds being contemplated, the concerns around the impact on humans are completely taken away, which means that the pods can travel through tighter corners with fewer repercussions on the cargo. That doesn’t negate the safety case for this system, but it does take away all of the human factors related to transportation of people.

With the current freight version of the Hyperloop concept (Magway) removing the near-vacuum element, it is possible to insert multiple destinations along the journey, which increases the potential of its uptake as it becomes possible to deliver freight into multiple locations across the country. Wide scale adoption of this method of freight transportation could reduce congestion on our roads and rail systems, with organisations looking to the increased speed and efficiency of Hyperloop to decrease the time to destination.

Overall, TRL believes at this stage, moving freight via the Hyperloop system has greater potential than people. However, until the trials are completed and more research is undertaken into its overall viability, there are too many unknowns to understand whether Hyperloop will make it into reality.

Read the full report "Hyperloop:Cutting through the hype"

[1] Calculations based on a London to Birmingham train journey time of 1 hour 22 minutes and London to Edinburgh combined plane journey/transfer time of 3 hours 40 minutes.