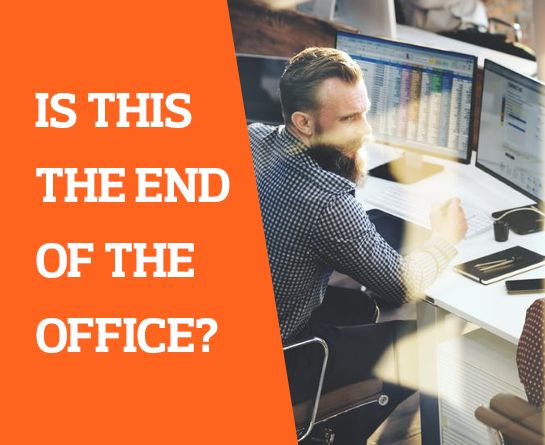 Is this the end of the office?

Paul Campion, CEO of TRL, considers the implications of the speed at which society can change

“Is this the end of the office?” ask a thousand think pieces and another thousand offer variants on “Why I am missing the office.” Research suggests that UK office workers are (or, at least, were, since the research invariably refers to a month or two ago) less keen to return to their offices than their counterparts in other European countries, but that may reflect the particular course of the pandemic in different countries, rather than intrinsic national differences. In every country people’s attitudes to working from the office have changed significantly and, if measures to enable 2019 levels of freedom to travel and mingle take between 6 and 12 months to be rolled out, as seems likely, what we have is not the “new normal”, it’s just “normal”.

Does this mean the office is dead? No, of course not. Just as some firms, and some people, were expert home workers before anyone had heard of SARS-COV-19, so there will be people in offices for as long as white collar work needs to be done. What has happened, though, is we have been forced to consider what the office is really for.

At TRL we love research and some of our behavioural scientists did some work to understand the work habits, and preferences, of our own staff. On average we found people slightly preferred full-time home working although there were people who strongly disliked it. Of course personal circumstances as much as personal preferences play a part here. For someone with a house and a supportive family swapping a commute for a stroll to the spare room or office has much to commend it. For a single person struggling to work, sleep and eat in one room in a shared flat the deal does not look so good. On the other hand many younger people may have much less difficulty believing that work relationships can be initiated and sustained online than older people whose experience of building work relationships may have leant heavily on gathering around the coffee machine and in the pub. The plural of ‘anecdote’ is not ‘data’.

My personal bet, for what it is worth, is that we will see a permanent shift to more flexible working and that the average number of days in the office per worker will not go back to where it was before the pandemic. How big will this shift be is currently unknowable but about a third of the workers in the UK are office workers so if, say, a third of future commuting trips from this group were removed then that would be roughly a 10% change in commuting travel demand.

It has also become very clear how many of the jobs of non-office workers depend on the travel patterns of the office wage slaves. The demand for take away coffee in central London has plummeted and the increase in demand in the suburbs does not help the baristas, cleaners, cooks, delivery workers and the others who jobs depend on the large transient population in the centre. It has been economic orthodoxy for forty years that there is no point in ‘propping up’ industries whose time has passed (see coal, steel, shipbuilding and so on) but whatever your view on this there is no avoiding the cost to the livelihoods of the people directly affected by the changes.

As Greg Marsden and others noted in their recent book ‘Conceptualising Demand’, the demand for transport is ‘encoded’ in the built environment. Changes in travel patterns usually happen slowly and we do not always notice how changes in economic activity affect (and are affected by) transport demand. Our cities, towns, villages and the infrastructure that connects them are being built around the pattern of habitual journeys, and our lives, in turn, are structured around the way that our environment has been built. It’s an obvious point but this is just as much true of freight and logistics as it is of personal mobility. I doubt that the amount of coffee being drunk has change much: the reduction in the number (but perhaps not the value of) decaff soya lattes being bought in Cheapside is probably matched by an increase in the sales of Nespresso machines and jars of Maxwell House in Tesco in Slough. In the short term this is inconvenience and personal hardship for the various people involved. In the medium and longer term it raises the question of land use for us as a society.

Do we want to accept these changes in working patterns as inevitable and provide the adapted transport networks to support them, or do we want a vision of a better world and the alignment of resources to help bring it about?

The mayor of Paris, Anne Hidalgo, has become famous for her vision of a ’15 minute city’. To be fair it is not her original idea (and nor does she claim it as such as far as I know) but the idea that a city like Paris can become a series of local communities where work, food, education, entertainment and our social activity can all take place within 15 minutes of our home is seductive, is it not? It would render many of the emotional arguments about active travel and public transport versus personal car use moot, for a start, and on the surface it sounds like it could resolve some of the apparent conflict between standard of living, economic activity and ways to address the climate crisis. There is something in it of Jane Jacobs’ hymn to a human-scaled city in her 1961 book ‘The Death and Life of Great American Cities’.

Now let’s not pretend that the literal plan that suits Paris would suit the challenges and opportunities of Headingly or Paisley, for example. But apart from the specifics of each individual place there are some structural reasons why this sort of vision seems to be in short supply and feels hard to achieve. Central government is, for very good reasons, organised in functional silos. The Department of Transport is not responsible for the economic and land use choices that do much to drive demand for transport. Local government, which has responsibility for running the planning system has, on the other hand, limited power to influence macroeconomic and national policy or the major infrastructure decisions that can support, or work against local regional preferences.

Modern life, and, in particular modern urban life, depends on a system of systems of great complexity. In their recent book ‘Greed is Dead’ John Kay and Paul Collier describe how the benefits and temptations of centralisation have resulted in the paradox that the coordinated, strategic actions that seem necessary to address the challenges of transport networks, for example, make it harder for those networks to respond to local needs. How can we reconcile the needs of democracy with the needs of efficiency? The recent palaver about the implementation, and then reaction to Low Traffic Neighbourhoods (LTNs) (by which we actually mean the prioritising of pedestrians and cyclists over motorists in a few streets) in places like Wandsworth show just how hard this in in the real world. Once again, there is nothing new under the sun. Bent Flyvberg in ‘Rationality and Power’ described how politics challenged and altered the implementation of changes to the transport provision in 1970s Denmark: the arguments for and against automotive priority on local streets were just the same then.

Just in case this already seems just too hard to think about there is the added challenge of our response to the climate crisis. How can we think about a better world when it will take all our time and energy to keep the seawater back?

At the risk of being thought to be (even more) unrealistic I think that there is an opportunity here too. As I have observed before, the pandemic has thought us that as individuals and as a society we are capable of much more change, much faster, than we had imagined. Climate change makes the pandemic seem like small beer: who knows what changes we will find we are capable of? We will need to respond, of course, but how much better if we start with a better world in mind and make our compromises from there instead of imagining we can go back to a past which, it turns out, was far from optimal anyway.