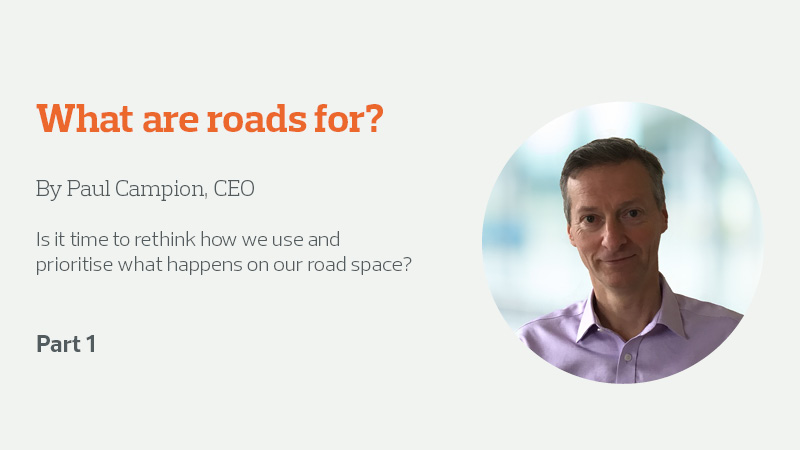 TRL's CEO Paul Campion presented at Highways UK in November 2021 on The Big Thinking Stage. Here he captures those thoughts in a two part blog.

The earliest memory I have involves a road. I seem to remember walking down a country lane with my mother in a scene very reminiscent of the picture on Start-Rite shoeboxes. If this is a real memory, and not just an example of the fiendish ability of advertising to worm its way into our minds, then nearly everything in it will have changed in the decades since. My mother and me are, sadly, not the sprightly young things we were and the nursery school we were going to is, no doubt, long gone. But the road will still be there.

The thing about roads is that they persist: every day we drive or walk along routes that were old when the Romans came to Britain. Change does happen, but slowly. It is fascinating to read about the way that roads fell into disuse in the nineteenth century as the railways became the default, and were then paved as bicycles and then motor cars proliferated. Surely roads will be fundamentally the same in 30 or 40 years time? Well, they will still be in the same place, of course, but perhaps it is worth asking what things might influence the way we use them in the future.

The influence of the decarbonisation agenda

The first, and most significant factor to take into account is the climate crisis. Decarbonising will involve changes in the vehicles using our roads, but much more besides. The sixth carbon budget published by Committee on Climate Change (CCC) assumes that a reduction in vehicle miles travelled of nearly 20% will be required to achieve net zero. There are two sides to this: one challenge is to make the changes in land use and society that will enable people to flourish, even as one in six trips by car, van or lorry are avoided. But the other is the law of induced demand. It has been known for a century that increases in road capacity create increases in traffic. Roads are a public service free at the point of use: the mechanism we use to share this resource is queueing, or congestion as we call it on the roads. To reduce traffic we either need fewer roads, or for motoring to be more expensive. Put this together with the expected reduction in customs revenue from fuel duty (as fossil fuel is replaced by electricity as the power source for cars and lorries) and we can see that more taxes on road journeys are probably inevitable. Finding a way to tax efficiently and fairly and, at the same time, to send the right price signals to support the desired behaviours, will require effective cooperation between the Treasury, the Department for Transport and other bits of government.

On top of the implications for users of roads, we need to find ways to build and repair roads that do not involve dumping huge amounts of carbon into the atmosphere. The implications of the necessary changes in materials and methods are not yet clear: knock-on changes to the cost and frequency of maintenance activity might require us to use roads in different ways, for example, by prioritising traffic on certain routes in order to manage wear and tear across the network in new, more proactive ways.

There is another major trend that, like climate change, operates over timescales that hides the scale of change from a casual glance: demography. People are living longer and having fewer children than they used to. There will be a higher proportion of older people in the future than we have ever known. For the last half century or more we have compensated for the relative lack of young people by encouraging immigration. In recent years we have made significant changes to this mechanism and it remains to be seen how this will settle down, but even on current trends it is clear that the proportion of over-65s will increase from 15% to 25% of the population in the next few decades. This matters for roads because we make different trips for different reasons as we go through life. Retired people tend not to go to school, nor take other people to school (10% of all trips) and they don’t commute to work (15% of trips). Their leisure patterns (30% of trips) are also different and they have more time to go shopping (22% of trips). What is more we don’t know whether the current differences in the tendency to drive and own cars between older and younger people is driven solely by economics, or whether there are baked-in differences in the way that the old and young think of cars versus other transport choices that will persist as the young get older.

Perhaps the most obvious change in the way we use roads is the switch to electric vehicles from fossil fuel. This is to be welcomed from the perspective of decarbonisation although  the current expectation that electric vehicles are intrinsically cheaper to run than petrol or diesel may not be sustainable. From the perspective of the road, however, there are other implications. The roll-out of charging points, for example, is being done with urgency, but in urban areas is sometimes being done to the detriment of other road users. Careless placement of charging points on roadsides can make vulnerable road users less safe, and reduce the attractiveness of walking and cycling. Another less visible impact is on the road itself. Current models of electric vehicles are about 25% heavier than their fossil fuel equivalents because of the weight of the battery pack. As more of the fleet is electrified this will have an increasing impact on the condition of the road surface, which could require increased maintenance or even changes to construction techniques and materials.

More visible changes may be required to decarbonise freight. Battery electric vehicles are rapidly being purchased in preference for passenger use. Batteries cannot, however, currently effectively substitute for diesel in the Heavy Goods Vehicles (HGV) fleet because their power to weight ratio is not good enough. There are a number of other technologies being investigated, such as hydrogen fuel and direct electricity supply. Supplying electricity directly to a large vehicle by means of overhead lines or conductors at ground level (a ‘third rail”) is very efficient and has been routine for many years for trains, trams and metro systems around the world: seeing similar systems installed on UK motorways and trunk roads might be a necessary part of our future roads programme.

The requirements to support a trend towards cycling

There is another trend, though, that I believe is under-reported and under-estimated. Cycling Industries Europe estimates that in the next decade the number of bicycles and e-bicycles sold will grow to over 30 million per year and that over half of those will be e-bicycles. In other words there will be more e-bicycles being sold than electric cars. Now, on one level that is not remarkable: e-bicycles are much cheaper than cars. But add this to the popularity of e-scooters (hundreds of thousands sold in the UK even before it is legal to use them) and the proliferation of new form-factors and types of vehicle (like the electric ‘tuk tuk’ currently operating in my home town: a lightweight three person taxi or last mile delivery vehicle) and we can imagine a fundamental evolution is underway. In the past, most people owned one motor vehicle, which performed every function. It took the kids to school, it took us to work, it carried the shopping home, it took family and friends out for a trip. Perhaps in the future, instead of general purpose vehicles, we might have a wider range of more specialised vehicles: push bikes and e-bikes for short trips (i.e. the majority), access to cabs, taxis and hire cars, a larger-format electric vehicle for long distance trips and so on. If this were to happen then we would need to think about how we design our roads. It is already very well understood that the critical enabler for walking and cycling is safe infrastructure: in order to use our roads differently, we may need to design, build and manage our roads differently.

The effects of digitalisation

The final trend that I want to consider is digitalisation. The impact of digital technologies on, for instance, the music, publishing and financial industries is very obvious…and the knock-on changes to transport equally clear on reflection. We no longer go to a record shop to buy a CD, nor to the bank to cash a cheque and our books and magazines are not likely to be delivered to our doorstep. But the direct impact of data, AI and mobile communications on transport has only just begun. Until very recently, transport systems were designed on the basis of ignorance: it was impossible to know where people and stuff were at any given time. Now, though, everything and everyone is tracked; their position known and, in many cases their intention known also. This is transformational (in the sense that it changes everything)…but transformational changes take time to play out precisely because they are so far-reaching. For transport, which is a highly regulated sector, the interaction between regulation, which creates and defines markets, and commerce, which exploits technology to exploit markets, is critical. To go back to the e-scooter example, the extent to which e-scooters become a mainstream transport technology will be completely determined by when and how they become legal for use on our roads and this, in turn, will be strongly influenced by the extent to which we are willing and able to adapt our roads and associated infrastructure to enable their safe use. The impact of big data, artificial intelligence (including, but by no means limited to, automation and driverless technologies) and pervasive mobile communications will touch every aspect of transport and will change the boundaries of what we currently regard as transport. For example the displacement of road freight to fixed logistics channels (like that created by the UK startup Magway) or to urban, automated airborne drone delivery, or to deliveries to our local newsagent for collection on foot, could have significant impacts on our transport networks with repercussions that we cannot easily predict.

In the next blog I will think about what the impacts of these trends might be on roads.