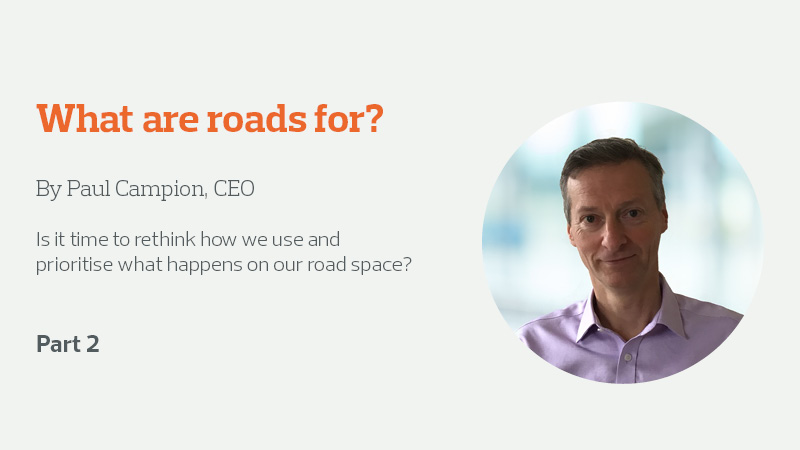 TRL's CEO Paul Campion presented on the Big Thinking stage at the 2021 Highways UK event. Here he continues his exploration of his big question.

In the previous blog I discussed the main trends that will change the way that we use our roads in the future. Now let’s think about the implications for our roads, and for the highways sector.

We are very used to thinking about roads as a free asset, limited only by our ability to put up with queuing. Of course this is a relatively recent way of thinking: in the past roads were routinely limited by the weather (i.e. impassable in winter because of lack of maintenance) and, where they were maintained at all, chargeable at point of use. In the future we cannot afford to make so many trips: current levels of transport are incompatible with a habitable planet. So decisions will have to be made and there will not be automatic agreement about what trips should be prioritised. In a democracy, politics is the way we discuss and agree our priorities as a society, and the second stated priority after decarbonisation is ‘levelling up’…or fairness. So let us imagine how we might prioritise road use in a fair way.

If we think about the hierarchy of roads then we can see that we have the main arteries of the nation (the ‘strategic road network’ or SRN) that connects the country and enables the supply of goods and services on which we all depend. A secondary network of smaller roads allows us to access the SRN. Most of us live on smaller roads still: the rural, suburban or minor town and city roads lined with houses and flats. If, as argued previously, we accept that there are likely to be a wide range of more specialist vehicles rather than the generalist, one-size-fits-all cars we are used to, then perhaps we can imagine the roads themselves being optimised to more specialised uses.

Along the SRN we might see overhead electric lines, or embedded or roadside conductors, enabling HGVs to move goods between ports and distribution centers. Long distance travel needs to be done on the SRN, but perhaps more of the short journeys that are now made on small segments of the SRN will be priced off the SRN, or automatically routed elsewhere, or avoided altogether as land use, distribution networks and service provision is made more local to reduce the need for trips.

Take the example of healthcare. Over the last decades, local hospitals and small surgeries have been closed in favour of fewer, larger centers where specialist skills and expensive equipment can be consolidated. This has improved the economics of healthcare and delivered better outcomes, but at the cost of requiring patients to travel further. Let us take up the challenge of working out how modern technology (not least communications technology) can re-distribute at least some parts of the system so that the need for those trips can be replaced. Of course I am not suggesting that this is easy, nor that reducing a few percentage of journeys to the doctors fixes any problems in and of itself…but if we eliminate some trips which our carbon budget can no longer afford, we could probably also deliver better outcomes to disadvantaged people for whom the trip to the hospital is inconvenient, expensive and acts as a disincentive to get the care needed.

Now repeat this thought experiment for social care. Then work out how we can reset market incentives so that more people can walk (or at least cycle) to get their daily groceries, or have them delivered by e-cargo bike. Let’s think about what incentives would have to be in place for internet retailers to coordinate and pool deliveries, instead of sending multiple white vans to the same street, or even same house, every day. This is a very different way of thinking about regulation and about the interactions between the things that create transport and transport itself, but I believe it is possible and necessary.

The intermediate roads are still needed to provide the spokes connecting people and the economy to the hubs on the SRN. But local roads could be given over to people’s lives. City streets for shopping, eating, spilling out onto after going to the pub or the cinema. Suburban and rural roads are for children to play football on, and to wander or cycle along.

Yes, this is a reductio ad absurdam, I realise that. But why could it not be an ideal we could aspire to? Let’s think about the changes that the infrastructure sector, the highways sector, could be thinking about now to move in this direction.

Firstly we could think about roads as ‘land corridors’. Rather than being devices for moving (fossil fuelled) vehicles about, we could see them as opportunities for wider connections. Fixed logistics technologies like the zero emission goods movement innovations from UK start-ups like Magway could go alongside or under major routes. While we are about it why not fill conduits with fibre connections.

Secondly, to enable a more diverse range of roads uses, we must break the link between roads, speed and secure metal cages. The single biggest thing that determines whether people cycle is the existence of infrastructure that enables them to feel safe doing so. As we all saw during lockdown, if we reduce the number of cars on roads then people use them in different ways: by walking, cycling, skateboarding and so on. We won’t get reduced vehicle traffic by wishing for it, but if we simply use a pricing mechanism like tax we will not necessarily get the fair outcomes that people have voted for either. We may need to accept that these choices have to be expressed in infrastructure to become real. The good news is that modifying existing roads to make them safer for walking and cycling costs peanuts compared to building infrastructure for cars: there is no problem of money, just of choices.

But while we are talking about infrastructure we need to understand that we still have a long way to go before we can build and maintain roads in a carbon neutral way. The industry has done much and is committed and working hard to do more but, at the moment, there is a gap between our aspiration and what we know how to achieve.

These changes need to extend to all parts of the system. At the risk of making you want to stop reading immediately, I suggest that procurement is a critical example. The infrastructure sector is used to procuring (and, on the supplier side, bidding for and winning) work on the basis of minimising risk and incrementally improving. It is hard to think of these as bad things, but in practice what it results in is clients procuring projects on the basis of ‘do the same as last time but a bit cheaper’ and suppliers bidding them on the basis of ‘minimise change from what we did last time to minimise the chance that we will carry the risk of something unexpected happening’. This is well understood in the industry and initiatives such as P13 and I3P show the way to better partnerships between clients and suppliers. There is also progress on learning from manufacturing industry to reduce risk and increase efficiency, by adopting radically new techniques such as off-site construction and plant automation, but take up needs to be much faster to get to net zero.

Digitialisation is an enabler. We need to do some fundamental thinking about how we can use our new ability to understand where people and things are, and where they need to go, to understand which journeys are necessary and to make the necessary one in a much more efficient way. On the maintenance and operation side, as well, building ‘Digital Twins’ of assets and linking them to twins of other systems (like power, water or rail networks) can help to improve efficiency and effectiveness. This will require a lot of technical work, but much more important, in my opinion, is the need to educate the leadership and decision-makers in the possibilities offered by technology and to support them in building and executing plans to grasp them. It is a brave new world but most of us grew up in the old world and cannot be expected to operate flawlessly in it.

Tomorrow’s roads will certainly be in the same place as today’s roads. I believe, though, that over the next couple of decades we can, and must, think about using them in different ways, and that that requires the highways sector and other parts of society, to think differently about how to build, maintain and operate roads.