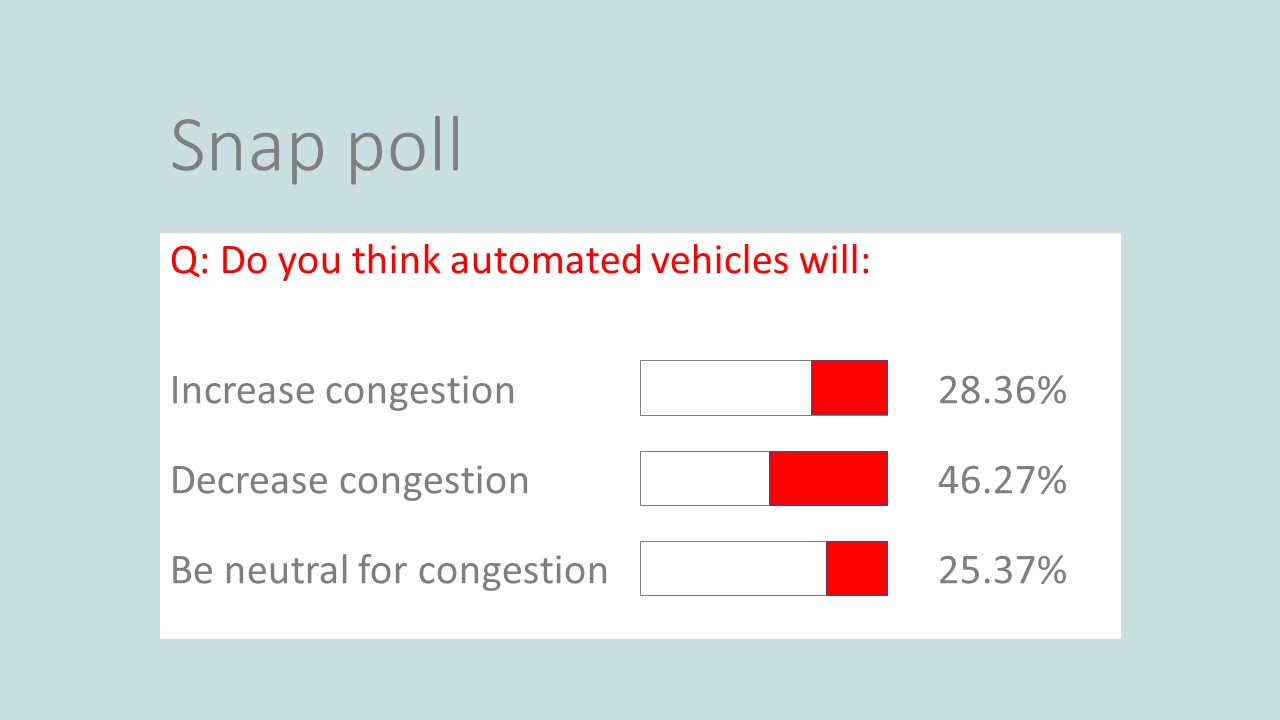 TRL's snap poll shows general optimism and continued enthusiasm for the possibilities of automated vehicles. But is this expectation well founded?

The TRL website has been hosting a poll for the past three months; the poll question links automated vehicles to congestion. Camilla Fowler, TRL's Head of Automation considers the implications of this (unscientific) poll.

It is curious to see that the poll respondents believe that congestion will decrease. The only way that can happen is if there are fewer cars on the road. The assumption here is that without drivers, cars will be more efficient at moving around.

Some people have proposed that we won't need personal cars – very soon we will all just dial up a car when we need it. But in this utopian future, that shared car (or delivery van) then goes off - empty - to the next pick-up point. So the total number of journeys made by cars won’t decrease with shared use. Sharing cars may potentially mean a decrease in need for parking spaces - but demand is very peaky, and vehicles will have to park up somewhere when not is use (unless of course they just drive around aimlessly waiting for a summons, but that definitely means more journeys, not less). There is a possibility that the concept of a car as uniquely a passenger vehicle disappears, and that autonomous vehicles can fulfil a variety of roles e.g. a car could convert to parcel delivery for part of the day when demand for people transport is low. This blurring of operational design domain is one way to even out demand, and fraught with safety and regulatory challenges.

Autonomous vehicles could in theory relieve congestion by virtue of their connectivity to their surroundings, so that they are all harmoniously synchronised with each other, all travelling at a uniform speed dictated by the road capacity and number of vehicles using it. Ah, if only this was true. So long as vehicles carry human passengers, humans will interfere with the operation of the vehicle. Humans are prone to unpredictable behaviour, so that the tasks of dropping off a child at school or collecting an elderly person and their shopping, which should only take a moment, can easily take an age as coats are done up, bags are dropped, drinks are spilled, and doors not properly closed. Even automated mass transport doesn’t solve the problem: how many times have we sat in a car behind a bus which takes forever to offload its passengers.

Automated vehicles offer great promises of a better transport future, and this poll reflects the general levels of optimism about this. Each demonstration of the technology raises expectations and generates excitement. Meanwhile, in reality, we still have many questions to answer about what exactly we need and want from the technology and what transport “problems” we hope they can solve.