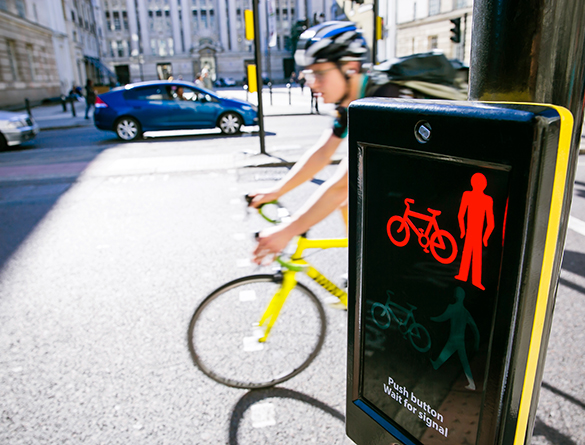 We were commissioned by TfL to provide additional functionality within TfL’s SCOOT UTC system which would enable the duration of the pedestrian invitation to cross (green man) period to be optimised based on measured demand from pedestrian detection equipment.

Existing functionality in SCOOT MMX allowed some optimisation of the green man, but this was calculated on 5 minute intervals with the level of demand (low, medium, high) expected to be set by timetable.

Following trials of pedestrian detection equipment, TfL requested the ability to optimise each pedestrian stage individually based on the measured level of demand at that that time. This necessitated changes to the SCOOT kernel, together with associated configuration software and data output / logging systems.

SCOOT has proven to be a world leader in Urban Traffic Control that reduces traffic delay and congestion in urban areas which also contains other traffic management facilities such as:

In London, SCOOT obtains information on traffic flows from 15,000 detectors, across 3,890 signalled sites under SCOOT control. With growing demands on road space, non-motorised forms of transportation and significant pedestrian movement across the capital the challenge was to enable the optimisation of traffic signals which considered pedestrian demand, in addition to road users.

Working in conjunction with the authority we implemented within SCOOT the required changes to vary the pedestrian crossing times based on pedestrian density detection.

In a world’s first, combining volumetric pedestrian detection and TRL SCOOT, London now has intelligent pedestrian crossings that can detect how many people are waiting and change the lights accordingly.

Trials of innovative intelligent pedestrian technology began in 2014 following the publication of 'Safe London Streets - Our Six Road Safety Commitments'. This document made clear how the authorities will meet the target of reducing the number of people killed and seriously injured on London's streets by 40 per cent by 2020.

The first trials of pedestrian SCOOT took place on crossings outside Balham and Tooting Bec underground stations to fully test the pedestrian sensors and discover how they interact with the existing vehicle SCOOT system.

Mayor of London, Boris Johnson, said: “I am delighted that London is the first city in the world to be trialling this cutting-edge equipment, which will benefit pedestrians across the city. This really is a fantastic example of how London is leading the way by using 21st century technology to help make it easier for people to get around our great city. Innovation like this is key to keeping London moving efficiently and making our roads safer for everyone to use.”

The benefits of Pedestrian Optimisation in SCOOT: