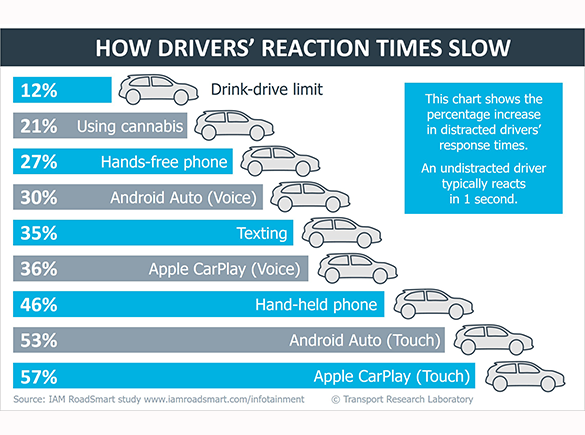 Interacting with Android Auto and Apple CarPlay when driving

Compared with the control drive, participants in both trials showed a reduction in average speed, increase in deviation of headway and larger deviation of lane position for most tasks; this effect was greater when using touch features than voice features. Eye gaze measures indicated that participants did not meet the NHTSA criteria for most of the tasks when using touch controls for both systems, but they met the criteria when using voice control. Self-reported data suggested that participants found interacting through touch to be more difficult and distracting than voice. Most critically, reaction time to a stimulus on the road ahead was significantly higher when selecting music through Spotify when using Android Auto and Apple CarPlay. Participants also failed to react more to the stimulus on the road ahead when engaging with either Android Auto or Apple CarPlay compared with a control drive. Comparison with previous driver impairment studies showed that the increase in reaction time when interacting with either system using touch was higher than previously measured forms of impairment, including texting and hand-held calls.